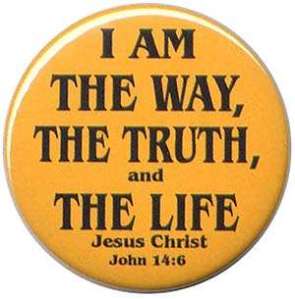 There have been times, when I turned on the News on TV that they interviewed prominent Christian Pastors  about the Christian faith and what Christians believe. They ask some general questions and then there is the one direct question that the host will ask the Pastors:  “Do you really believe that Jesus is the only way to Heaven?”

When I hear that question, I cringe. What answer will this Pastor give and will he tell the truth or trying to avoid a confrontation with the host and the audience?

Sadly, I must say that most of these prominent Pastors failed miserably and danced around the question. Why? Are they afraid to speak the truth, or are the afraid that some people might get offended by the truth?

This statement alone by Jesus would make Christianity very exclusive.  Jesus is plain and simply saying that there are no other ways to be reconciled with the Father but through Him. Was He lying when He made that statement?

Disciples and followers of Christ know this to be true, but there are of course many others that do not agree with that statement. There are for one those of a different faith that would not agree either. Than there are those who have no faith or “religion” at all and lastly those who call themselves Christians, who have become lukewarm and departed from the truth and follow the doctrine of men.

People of a different faith sometimes call Christianity the  “exclusive Club” and it is not surprising when they post the question: “What makes you think that you as Christians are the only once that have a relationship with God and we are not? We believe in a god, just not your God.

Was the Apostle Peter lying when he said: “Nor is there salvation in any other, for there is no other name under heaven given among men by which we must be saved.” Acts 4:12

Muslims claim that Allah is the true god and that all other people of faith are infidels. I have heard Jewish people say that they will automatically go to heaven just because of their Jewish faith.

Hindus worship over 3.3 million gods and Buddhist, which is really not a religion but more of  a philosophy,  believe that they can reach Nirvana if the follow certain steps and the teachings of Buddha. Buddhist also believe in re-incarnation. A do over if it didn’t work out as they had hoped in this lifetime.

What is the truth and who is right?  Christians are not the one that made the statement about the only way to heaven, it was Jesus.  So, those who have a problem with what Jesus said have to ask Him.  Jesus, Who is God (2nd person of the triune Godhead) is the only One that came to reconcile the world to God, by laying down His life on the cross so that those who believe by faith will find forgiveness,  salvation and eternal life. He was the Passover lamb, the promised Messiah.

“Therefore, in all things He had to be made like His brethren, that He might be a merciful and faithful High Priest in things pertaining to God, to make propitiation for the sins of the people.” Hebrews 2:17

“And He Himself is the propitiation for our sins, and not for ours only but also for the whole world.” 1John 2:2

“In this is love, not that we loved God, but that He loved us and sent His Son to be the propitiation for our sins.” 1John 4:10

All other religion are man-made and there is only One true and living God. Christians believe in the God of Abraham, Isaac and Jacob. The Creator of all things, Who created us  for His pleasure and to fellowship with Him just as Adam and Eve did before the fall. When sin entered the world, mankind was spiritually separated from God.

Jesus bridged that gap by going to the cross to die for our sins. It is through His blood that we can be reconciled with the father. After Adam and Eve disobeyed God, they tried to cover themselves with fig leafs to hide their nakedness. God clothed them in animal skins, signifying the first blood sacrifice. He did not accept a fig leaf religion i.e man made. Later at the time of Moses, God in the law required animal sacrifices for the sins of the people. The passover lamb which took place once a year was a picture of Jesus our propitiation. The blood of the animals could only cover the sins, the blood of Christ on the cross took away the sins once and for all. ”

“But He was wounded for our transgressions, He was bruised for our iniquities; the chastisement for our peace was upon Him, and by His stripes we are healed.” Isaiah 53:5

God gave His only begotten Son and He paid a very costly price by having Jesus hang on the cross to be the substitute, the propitiation for our sins. Through His blood we are healed because He did what we could not do for ourselves. God the Father looks at the believers through the blood of Christ and he does no longer see our sins, He sees Jesus, Who’s righteousness was imputed onto those who believe by faith, just as Abraham did when he believed God.

So when Jesus said, I am the way, the truth and the life, no one will come to Father but by Me, I have absolutely no problem believing the words of Jesus.  He died for my sins and the sin of the world. Because of Him, we can come boldly before the throne of God and we have once again a relationship with God through faith and not of works.  All man-made religions are works based, man trying to reach God on their own merit i.e a Fig Leaf Religion. All other religions are trying to reach God, in pure Christianity, God is reaching down to man.

Not everybody will agree with what I wrote because they will argue that there are many other religions with good people who seek and love God, so why would you even think that only Christians know the real God and are the only once that go to heaven because of Jesus? My answer is that I believe Jesus and I believe that He died and rose for me so that I may have eternal life. No one else can claim that. No Muhammad, no Krishna, or any one else.

If you are of a different faith, you have to ask yourself this question: Does my god love me as a loving father or is my god angry at me because I can’t live up to his/her expectations?  Do I have assurance of my salvation? Are my sins forgiven? Can I be sure that I will go to heaven when I die? If you have any uncertainties, you may want to at least learn about Jesus. Jesus said, seek and you shall find. If you feel empty or a void in your heart, ask Jesus to reveal Himself to you. He loves you with all of His heart and He does not want you to perish. Many people will perish because they have either rejected the free gift of salvation or they do not want to come to the truth. People make their own choices because of the free will given to us by God. Many people have heard about Jesus, but are not willing to listen or surrender. Bad choice. The following verses are also the words of Jesus:

“For God so loved the world that He gave His only begotten Son, that whoever believes in Him should not perish but have everlasting life. For God did not send His Son into the world to condemn the world, but that the world through Him might be saved. He who believes in Him is not condemned; but he who does not believe is condemned already, because he has not believed in the name of the only begotten Son of God. And this is the condemnation, that the light has come into the world, and men loved darkness rather than light, because their deeds were evil. For everyone practicing evil hates the light and does not come to the light, lest his deeds should be exposed. But he who does the truth comes to the light, that his deeds may be clearly seen, that they have been done in God.” John 3:16-21

By having a close and personal relationship with my Lord Jesus instead of religion, I am very pleased to be a member of the “Exclusive Club.”

4 thoughts on ““The Exclusive Club””